In 1998 I took part in the competition "Das Starterhaus" of the german construction financing company BHW and the magazine "ZuhauseWohnen".

The central idea of my design was an atrium crowned by a roof made of glass which served as a communicative and versatile space. This idea apparently convinced the jury, so that I was awarded the prize on April 2nd, 1998 at a two-day journalist conference in Berlin on the subject of "Building and Living in the 21st Century".

Drafts of inexpensive, expandable houses for young families were to be submitted for the competition. The houses should have at least 110 square meters of living space in the first expansion stage and should be realizable for less than 2000 DM building costs per square meter.

The following picture gives an impression of the concept: 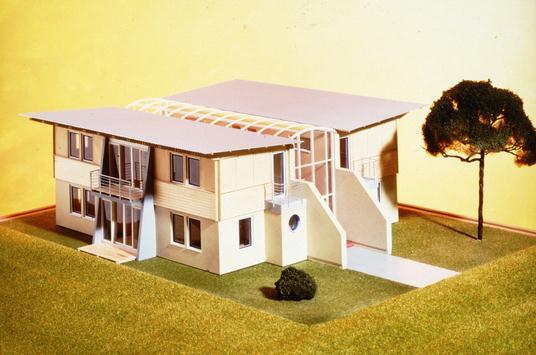 The prize was handed over in Berlin.